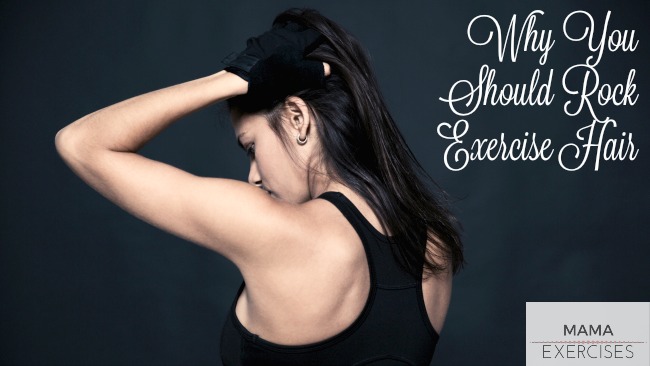 Okay, guys, you’re probably not going to grasp the whole exercise hair thing (unless you’re Fabio), but, ladies, I know you’re going to understand.  When you exercise and you have long hair, you toss it up into a ponytail or a bun to get it out of your face. It also keeps it from sticking to your sweaty self which, believe you me, is an important part of exercise comfort.  You’re more concerned with function over form and, in most cases, your hair is pretty much a hot mess by the time your workout is over.  And that, my friend, is something to be proud of.

You Earned the Right to Exercise Hair in Public

Let me tell you a quick back story as to how this article came about and why I am now on a mission to help women embrace their exercise hair.  You see, on Saturday morning (at like 7am), I went on an almost 3 mile walk with my parents.  In the woods.  And despite it being 7am, it was hot. Hot hot even. So, my messy bun started to droop and sag and by the time I got back to my car, it had definitely earned exercise hair status.  But who cares, right? I had just been out walking and getting in a nice little workout before most people were even out of bed.

Now, I had planned ahead and brought along two packages that I needed to mail at the post office before I went home. The air conditioner is broken in our car, so I had the windows down and radio turned up…to ukulele music, because it’s happy and upbeat. I was in a good mood.

I dropped the packages off (love self-serve post office kiosks!) and headed home. By now it was about 8:20 or so and the world was starting to wake up.  Again, windows down, exercise hair blowing around, smile on my face.  And then I got stopped at a traffic light waiting to turn left and a guy pulls up in the right lane next to me.  Did you ever just know that someone’s looking at you even though you don’t turn and check?  Well, I knew he was. Annnnnd it was a bit creepy.

The light turned green and I waited to turn, but in the meantime, he slows down next to me, rolls his window down, leans out the driver’s side window and snickers, “Love the poofy hair” before speeding away.  Dude.  Really?!? Not cool.

I stewed about it for a bit and got mad, then laughed, then got mad again, and then finally I realized that although I know I shouldn’t care what Stupid Jerk Guy said, part of me really did.  And that was just sad.

Not only was he a big old jerk, he went out of his way to purposefully be rude and mean. Who does that?! Worse was that he made me wonder if I really should have done my hair into a neater bun or cleaned up more before running to the completely empty, not even open yet post office after exercising.

And the answer, friends, is no, I shouldn’t have. That messy exercise hair was a result of an early workout, effort, and determination. It symbolized a choice to get out of bed and go do something healthy vs. staying in bed or eating donuts for breakfast. It was the product of a healthy choice (and also having the windows down, because there’s no AC in the car).

I’m not saying that you should never do your hair or that you shouldn’t wash it after exercising, but I am encouraging you to embrace the proof of your workout. Embrace the messy hair. Embrace the bicep bump that gets bigger each month. Embrace how much stronger and flexible you feel.

Embrace the healthy changes that you’re making and don’t ever, ever, ever let some Stupid Jerk Guy say something that makes you feel like you need to do less or be different for someone else.

Rock that post-workout exercise hair in all of its glory. You’ve earned it!